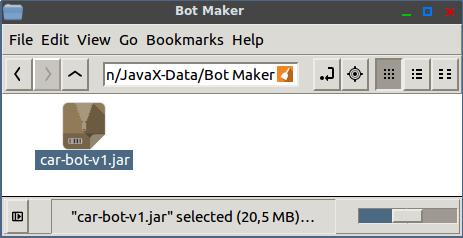 One huge jar file. Includes a GUI and a database. And learns from the cloud while running. 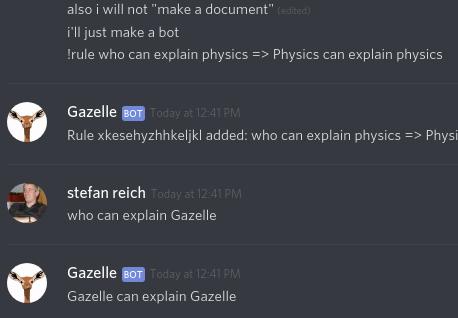 ...will explain itself (as a general principle). 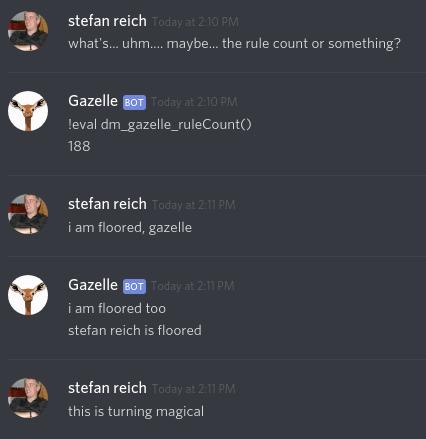 Yes, it's all automatic. The original rule is just matching for "what's the rule count".

Sometimes I just have to do this—coming up with a really intelligent little solution for common coding questions that, oddly, don't seem to have an answer yet.

Like this one: How to find out efficiently whether a prefix of a string is contained in a tree set.

PS: Haha, now StackOverflow is saying they want to delete the answer. I was improving on another answer which apparently is not being deleted? StackOverflow is complete madness as I have said before. 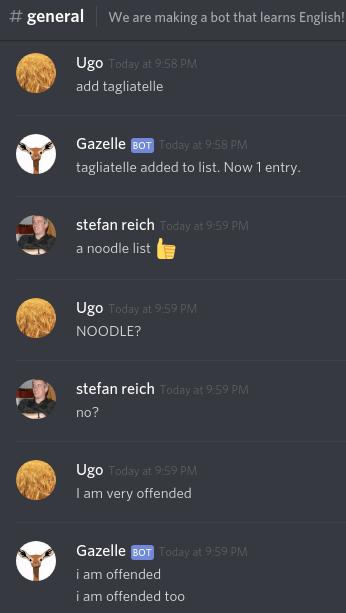 Given these example dialogs:

Gazelle understands what kind of calculation you mean and performs it for you on new input. 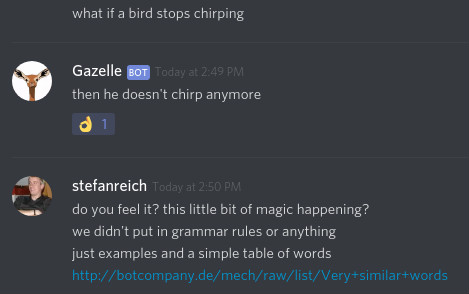 Come join us over at Discord.

Nothing can stop this.

In other news, my current cash level (for the rest of the month) is roundabout 10 €. Money is such a great invention! 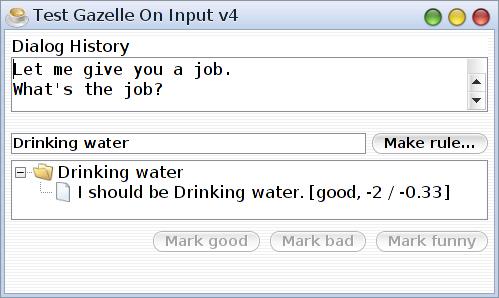 A logic engine is what makes machines talk.

This new one I'm making is really impressive.

The new engine merges syntax and semantics; allows humans to teach the machine how to think easily; and it doesn't require a full model of the language in question (say, English).

Either way: Expect demos soon. Until then, enjoy the chewing gazelle.

Function that does this.

Matt Mahoney recently gave this little example of ways in which language is ambiguous:

I was inspired to make a program to interpret these different meanings of the word "with". I used the 3 lines as training examples, then made some new examples for testing.

My program is a logic engine that takes the following rules:

The logic engine performs some analogy reasoning using the rules stated above. Note that most of the rules don't distinguish between variable and non-variable parts, this is usually inferred automatically.

That's it! Now we give the program the following new inputs:

...and it comes up with these clarifications:

So nice! It's all correct. Sure, nobody would say "the pizza had ducks on it", but that is the most reasonable interpretation of the rather bizarre input sentence after the program eliminated the other two options (ducks as a tool or ducks as a person).

If you remove the line that says ducks are not persons, the program will correctly add the interpretation "I ate pizza and ducks were with me."

Full program in my fancy language.

In addition to the results, the program also shows some lines of reasoning, e.g. failed lines:

Why did I make a specific program for this puzzle? Well, it's not a special-purpose program really. It's a general-purpose logic engine that supports problems of a certain complexity. Like a child understands everything as long as it's not too complicated. The plan is to make increasingly more capable logic engines until we can solve everything.

The program itself is <100 lines (not counting rules and input), but of course it uses some powerful library functions.

This should be converted to this rule which is executable:

Actual program that does the conversion:

As you see, the only customization the function requires is a list of pronouns and nouns.

Finally, we can test the new rule.